I woke that morning to the sound of rain on the top of the tent but as it always sounds worse than it actually is I hoped it wasn't that bad. Looking out of the tent window it seemed to be just a fine intermittent drizzle but when I took the dogs out for their first walk I realised it was a bit more than that, and by the time we got back to the tent all three of us were rather damp.

The wet day meant that the big car boot sale over on the Anglesey show ground wouldn't be on, but by mid morning I'd had enough of being in the tent and decided to go over there anyway in the hope that the middle of the island would be dry. It wasn't, it was just as wet as back at the camp site and the car boot sale definitely wasn't on so I carried on straight up the A5 to the Stermat store at Valley. I can often find things there when I've not been able to get them anywhere else, and this time the place came up trumps - I found the plastic tablecloth I'd spent so long looking for! Except it wasn't actually a tablecloth, it was a shower curtain. In a two-tone blue and white mosaic tile pattern (blue would match my other camping accessories) it was larger than I needed but I could cut it to size and probably get two tablecloths out of the one curtain - and at only £4.19 it was far cheaper than buying a proper thick plastic tablecloth. Added to that was the 5-metre 2-way extension cable I found for the same price (cheaper even than Asda) and I came out of Stermat a very happy bunny indeed.

My next stop was on the outskirts of Holyhead to pay an impromptu visit to my camping friends Louise and Derek. It had been twelve months since I last saw them so we settled in for a good chat and before I knew it a couple of hours had passed. It was great to catch up on all our news but I was getting hungry and Pete's Burger Bar was calling me, so I said my goodbyes and drove back down to Penrhos coastal park for my usual cheeseburger. While I'd been in Louise and Derek's the rain had stopped and by the time I'd eaten my burger the sky was clearing and the sun was shining; there was still some low cloud over the seaward side of the bay but things were looking good in the other direction so I decided to take a chance and head that way. 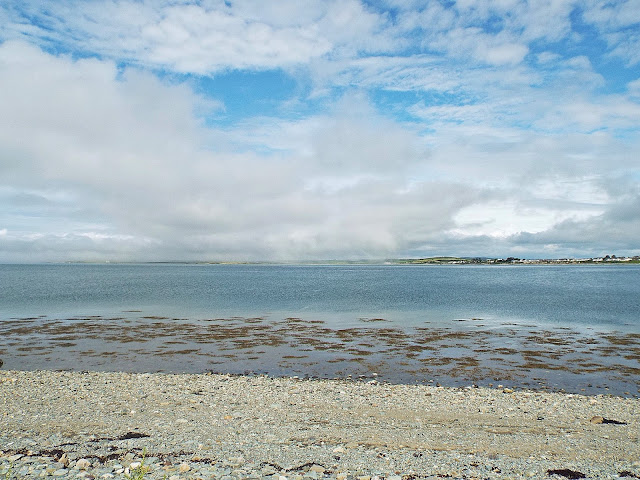 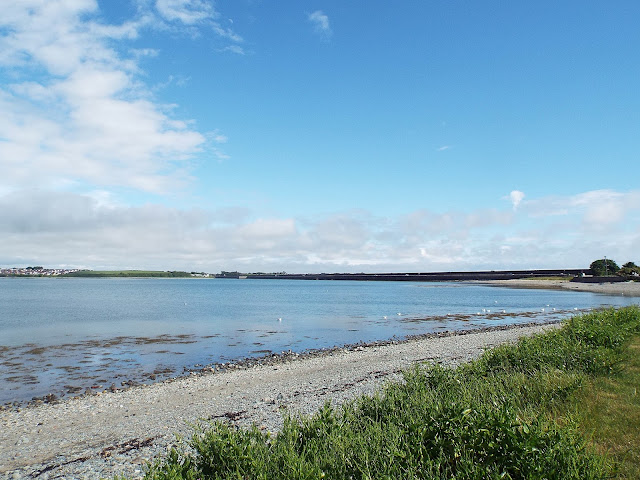 Driving back to the outskirts of Holyhead I picked up the road to Trearddur Bay; going along the coast road the late afternoon weather got better and better and I stopped a few times to take photos of the views near Trearddur. As it was turning out to be so nice I thought I may as well take advantage of it if I could, go down to Rhoscolyn and try to find the White Arch on the coast and which I missed last year. 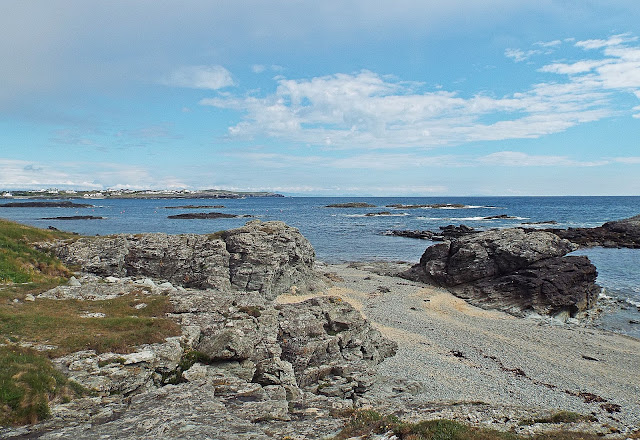 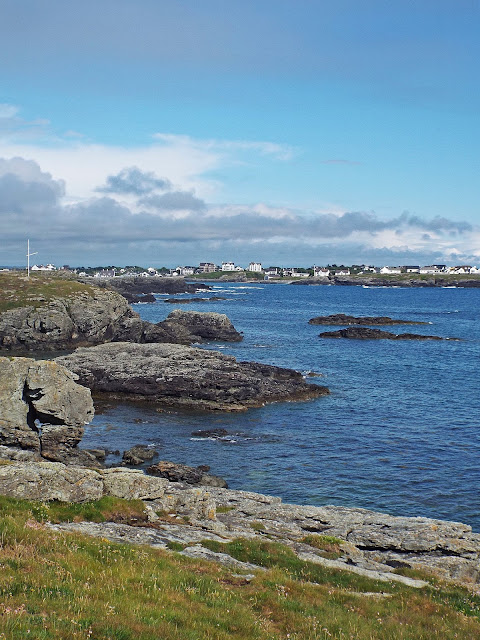 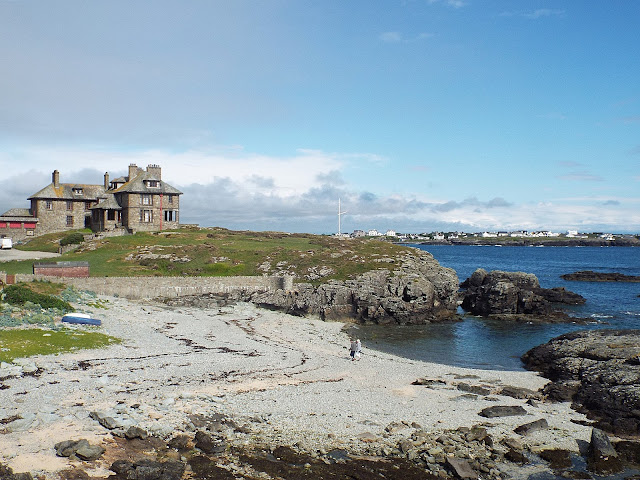 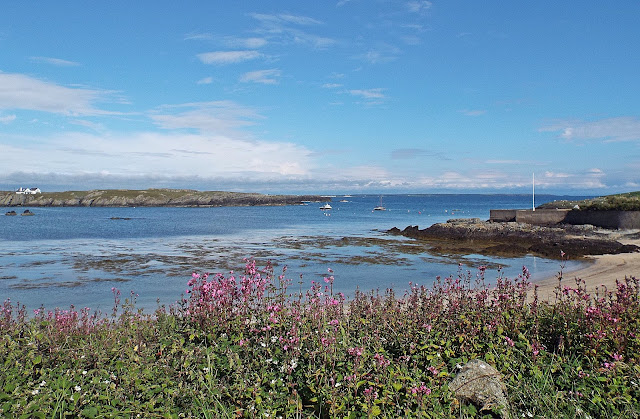 It was 6pm when I parked up at Rhoscolyn beach; I had quite a long walk ahead of me and I didn't want to lose any sunshine now it had arrived so I set off at quite a brisk pace, which didn't slacken even going up the steep hill to the coastguard look-out. Having walked that part of the Anglesey Coastal Path last year while I was searching for Tyger's memorial stone I knew where I was going so it didn't take me as long to get there as it had then - and I even met a couple of friends in the form of two white goats which were wandering along the cliff top. 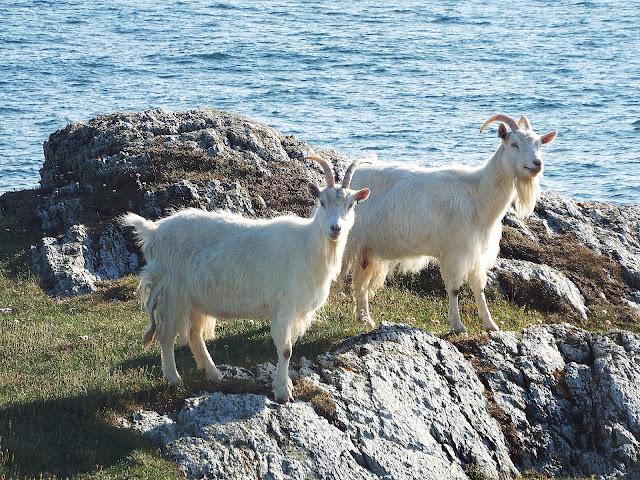 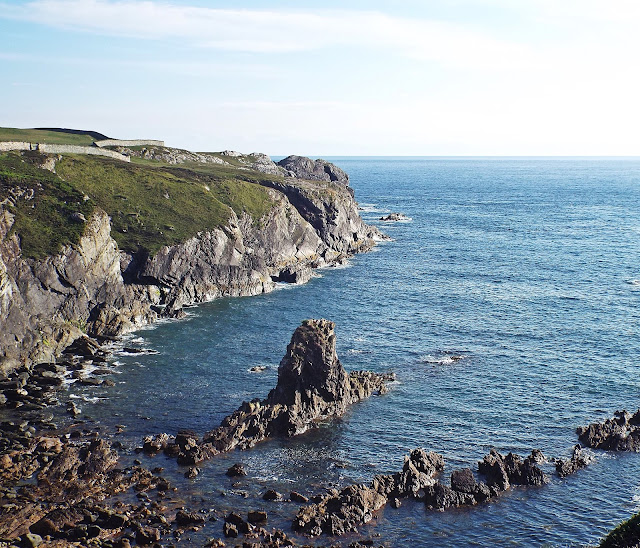 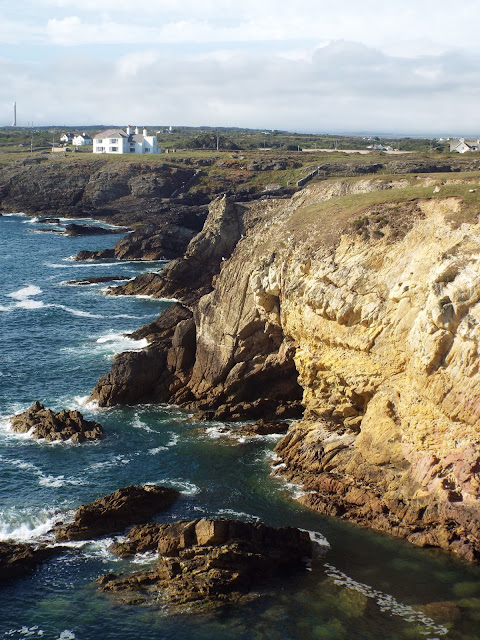 Information I'd been given told me that the White Arch was in the vicinity of Tyger's memorial so it was just a matter of going from the stone to the cliff edge and walking along until I found it. I located it within minutes, and though a big part of it was in shade it was still worth taking a few photos. It was actually possible to walk out onto the top of it but with two lively little dogs I didn't even consider it, even though they were on the lead. 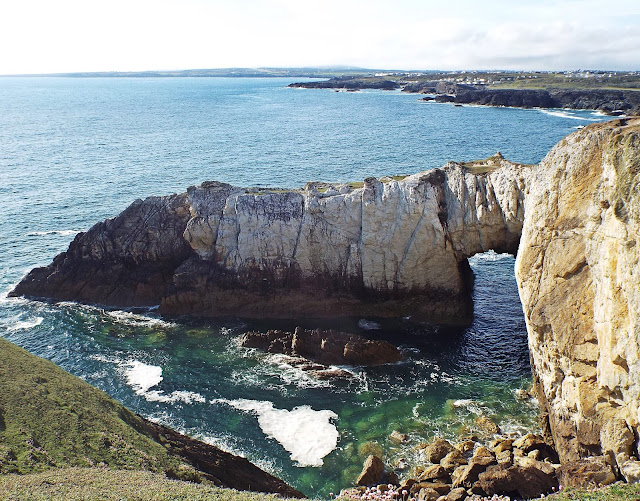 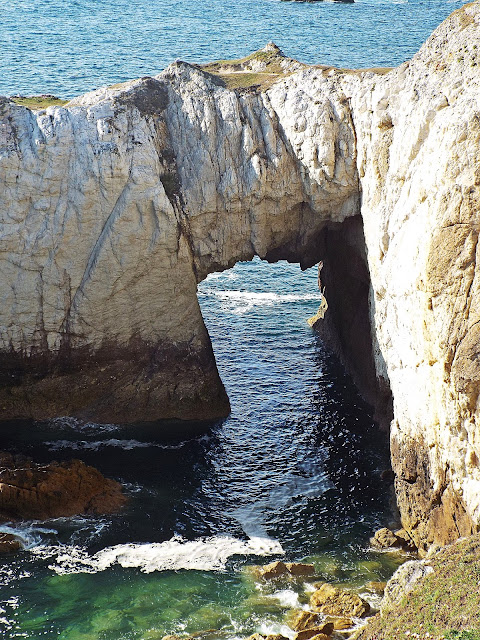 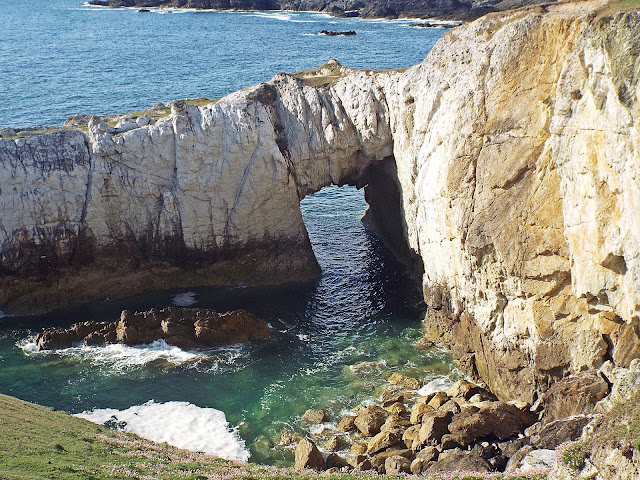 When I'd taken all the photos I wanted I went back to spend a few minutes at Tyger's memorial, and just like last year I picked a small posy of wild flowers to leave there. I don't know if anyone looks after the stone - a ranger or maybe one of the locals - but I noticed that the paint was fading from the inscription and it needed re-doing. Maybe next time I'm on Anglesey I'll take a small pot of black paint and an artist's brush and re-do it myself if it still needs it - it would be a shame if it faded completely. 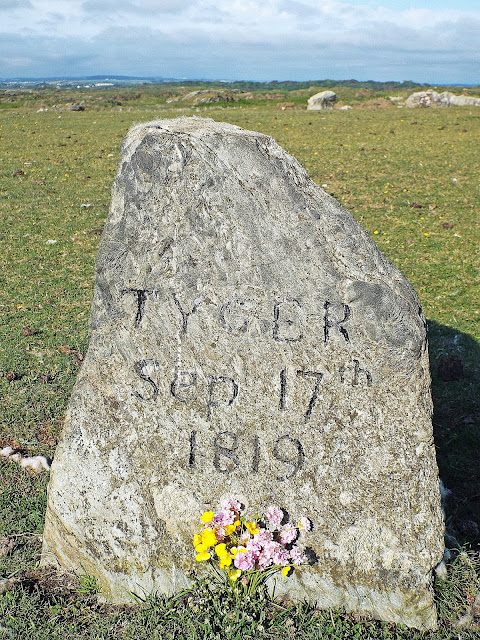 It was gone 7pm by the time I set off to walk back to the van but the weather was still good and it was a lovely evening, though with time getting on I didn't linger. The sunshine and blue sky had spread right across the island so the drive back to the camp site was very pleasant, though after that long walk the three of us were glad to get into the tent and relax for a while.

It was much later on when I got quite a surprise; stepping out of the tent to take Sophie and Poppie for their bedtime walk I found the site covered in a mist so thick I couldn't even see the other side of the field. After the day had turned out so nice where on earth had that come from?? It must have arrived fairly quickly as I hadn't got back to the tent until gone 8.30pm and the sun was still shining then.

Now even though I'm used to walking round the empty site on my own at night, and the mist didn't particularly bother me, something felt not quite right but it took a while before I realised what it was - there was no birdsong. Even quite late at night there would always be a bird or two twittering away in a tree somewhere but this time there was nothing - not a sound anywhere, just an eerie silence all round me and the blanket of mist swallowing up everything I would normally see. I wasn't scared - there was nothing really to be scared of - but I was certainly glad when we got back to the tent.

As I got into bed later on had my fingers metaphorically crossed that the current mist meant that the following day would be a good one. It was my final full day and I still hadn't had my planned 'big day out' so a few hours of wall-to-wall sunshine would be nice - well, I could live in hope, though with the current weird weather anything could happen.