After a pleasant drive back to Anglesey the previous evening I had arrived at the camp site at 10pm to find the awning was exactly as I had left it two days previously. It was great being able to just drive straight onto my pitch and park up, and with the awning connected to the van I'd spent some time relaxing with a brew before taking Sophie and Sugar for their late night walk before bedtime. When I woke that morning I was pleased to find that the sun was shining and the sky was blue with only a few small fluffy clouds here and there - a great day for taking photos, and if it was like that for the rest of the weekend I would be well happy.

Taking the dogs for their first walk round the site I could see that there had been quite an influx of campers over the last couple of days, and such was the popularity of the place there was a steady stream of vehicles arriving at the entrance. My idea of getting there early in the week had obviously been a good one - there's no way I would have got the pitch I was on if I'd only arrived that morning. The 4 x 4 owner and his friend were packing up to leave so I went over to thank them again for their help with the van and for keeping an eye on my awning, then as I wasn't in any great rush to go out I spent most of the morning pottering about round the awning and chatting to another couple of campers.

It was gone lunchtime when I finally left the site and headed north to Amlwch - I had decided earlier on that I would only go to one place and that would be Port Lynas to get some shots of the lighthouse, which I hadn't managed to do the last time I went there. The winding country lane from Amlwch didn't seem to be as long as before and I was soon pulling into the grassy car park at the top of the road leading down to the little bay. With the dogs on the lead I walked down the hill and turned right at the bottom, and once I'd got a few yards along the traffic-free lane I was able to let them run free and explore. It was quite a distance round the bay and out along the headland to the lighthouse but with birds singing in the hedgerows and odd butterflies flitting here and there in the sunshine it was very pleasant.

When I finally reached the lighthouse I wasn't quite sure what to make of it. The lane ended in an arched stone entrance with a tower at each side and white-painted castellated walls running to left and right. Through the archway was a courtyard with a cottage on either side - appropriately named West Cottage and East Cottage - and what appeared to be a house at the far end, with the lighthouse itself behind it. This was all obviously private so I could go no further, but there was a footpath running along the outside of the wall - part of the Anglesey Coastal Path - so I took that to see where it would lead. The castellated wall continued all the way round, and with the top of the lighthouse tower being the same design it reminded me very much of a fortress. 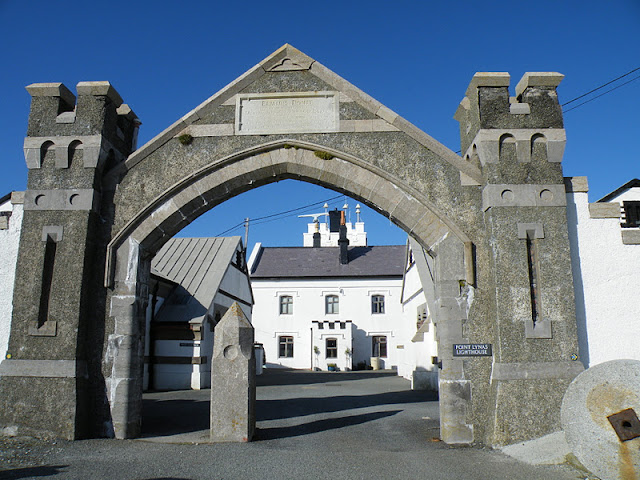 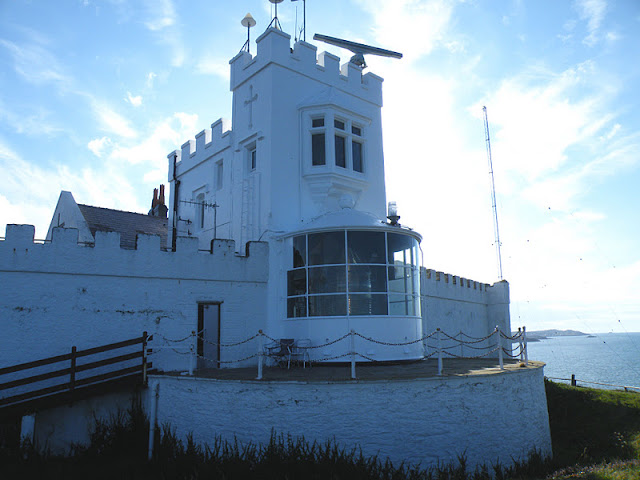 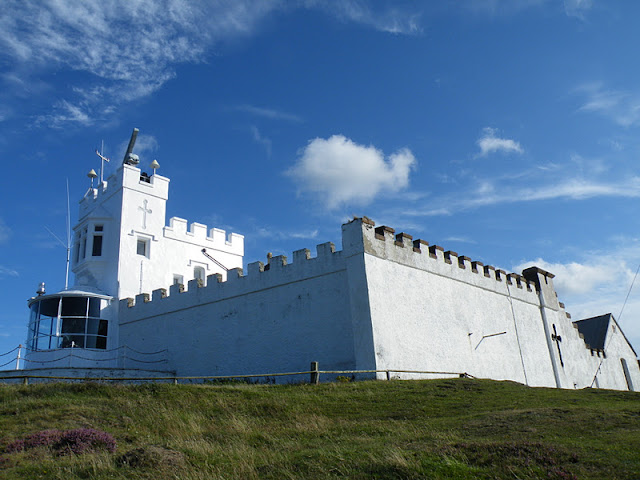 To the right of the lighthouse the rough land sloped steeply down towards a small rocky cove where a strange-looking wooden jetty, supported by tall wooden towers, was built out into the sea.  I don't know what purpose it served, if any, but it looked rather incongruous sticking out there like that and I felt that it somewhat spoiled what was otherwise a nice area. ﻿When I had walked all the way round the lighthouse buildings and there was nothing more to see I set off back down the lane - on my way up I had noticed a path on the right heading off across the fields so decided to see what was along there. I could see nothing much at first as the path was bordered by bushes and very tall dense grass but eventually it became less and opened out onto a large expanse of sloping headland with the path running across it. There was no point going too far down as I would only have to come back up again so instead I sat on a large flat stone at the side of the path while the dogs played about in the grass for a while - with no-one else around and no sound other than the calling of various birds and the sea as it washed onto the rocks down below it was a really peaceful spot. 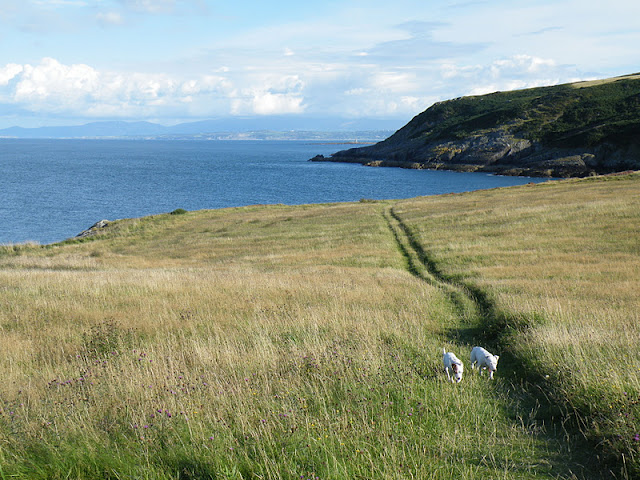 Eventually though it was time to move on and with the dogs following behind I made my way back up the hill to the lane and continued on to the little bay. At one point there was a large gap in the bushes bordering the lane and a good view over the bay so I stopped for a while to watch what was happening on the beach below. There were several people down there and a couple of 4 x 4 vehicles with boat trailers attached; the tide was on the way out and one of the vehicles was in the process of bringing a boat in from the water. I snapped a couple of photos, put the dogs back on the lead, then headed up the road to the car park. 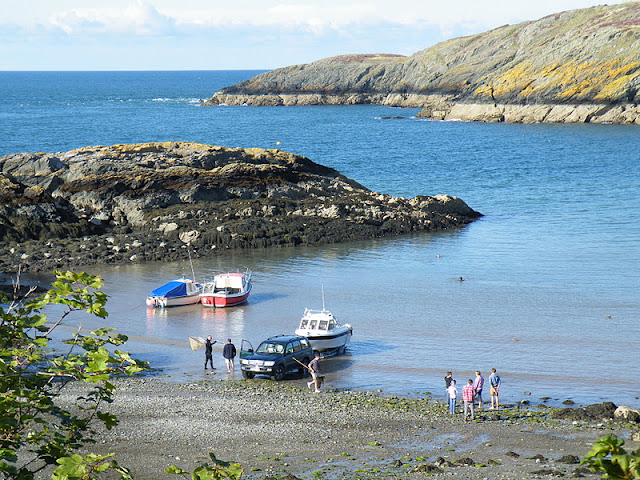 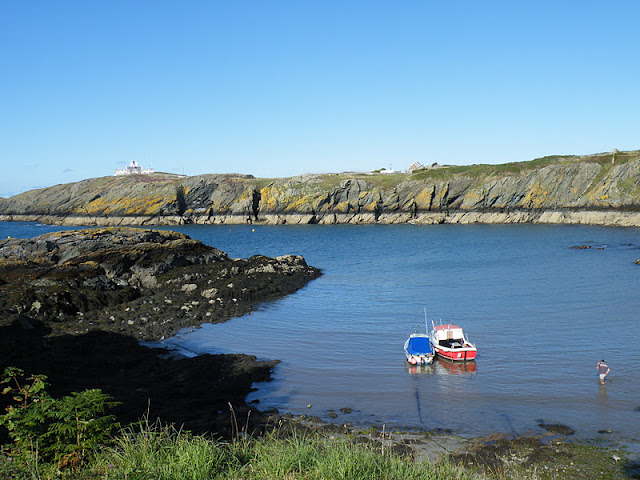 Back at the van I did briefly consider going on to somewhere else and even consulted the map book to see if I could get some ideas but nothing immediately came to mind so I stuck with my original plan of 'only one place' and set off back to the camp site. I spent the rest of the afternoon sitting in the sun and trying to decide where to go the following day. Having been to Anglesey so many times I must have seen, or driven round, more or less every square inch of the island, so I was now getting stuck for ideas. And it crossed my mind that as much as I loved Anglesey maybe after all these years it was time to seek pastures new and camp somewhere else at weekends - that was something which needed a lot of serious thought.
Posted by Tigermouse