Friday August 19th 2011 - Dunwich and the road to nowhere

Another sunny morning arrived and after the first dog walk of the day I made some toast and coffee and sat down with the map book to decide where my daily outing would take me this time. I finally settled on going south to Dunwich - many centuries ago the town had been a large sea port and the capital of East Anglia, but several fierce storms and floods over the years, and constant coastal erosion, have reduced it gradually to nothing more than a very small village. I had been there several years ago, and although there wasn't much in the village itself - about three dozen cottages, a pub and a small museum - there was a good fish and chip cafe next to the beach and a ruined friary nearby which I fancied revisiting.

The route to Dunwich was a simple one - straight down the A12 - and about halfway between Lowestoft and Southwold I spotted a sign for the village of Covehithe so on the spur of the moment decided to make a detour. I had been to Covehithe only once, sixteen years previously, and had been fascinated by the ruined church and what I had, at the time, termed 'the road to nowhere' - a country lane which ended in a sheer drop from the cliff top onto the beach below. It would be interesting to go back after all this time and take another look.

The village itself was a couple of miles off the A12 and consisted of nothing but a handful of cottages, a farm and the church; as I approached along the lane I could see several cars parked on the grass verge and as that seemed to be the only parking place available I pulled in behind the last one, and with the dogs on their leads I set out to explore. The lane split into two just up ahead and at the junction was a 'No through road - access only' sign so I knew I was heading in the right direction. Another hundred yards or so brought me to the Church of St. Andrew, a small old chapel with a thatched roof, built inside the ruins of a much older and larger church - a notice on the board by the gate said that the church was open for visitors to look round so hitching the dogs to the gatepost I went for a quick look inside. It was lovely - a simple little place with old wooden pews and a dark red carpet covering the old flagstone floor down the aisle to the altar, and with such an air of peacefulness that I sat for a few minutes in quiet contemplation before signing the visitors' book and making my way back out into the sunshine, then after a quick look round the ruins I collected the dogs from the gatepost and set off to find the end of the lane. 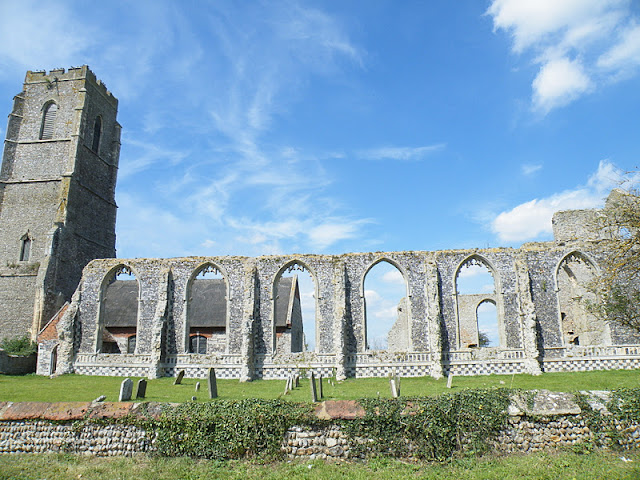 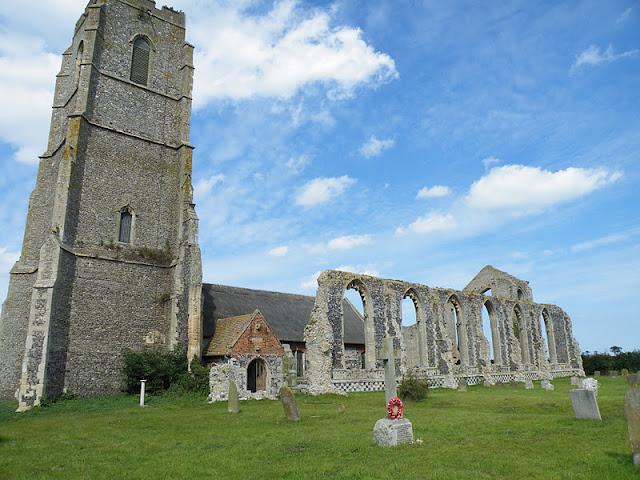 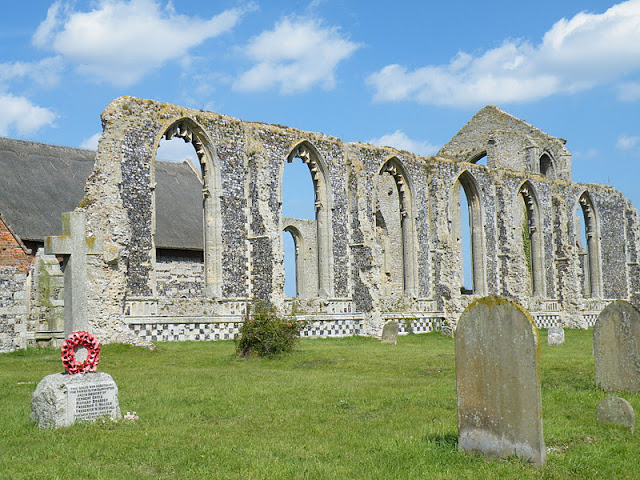 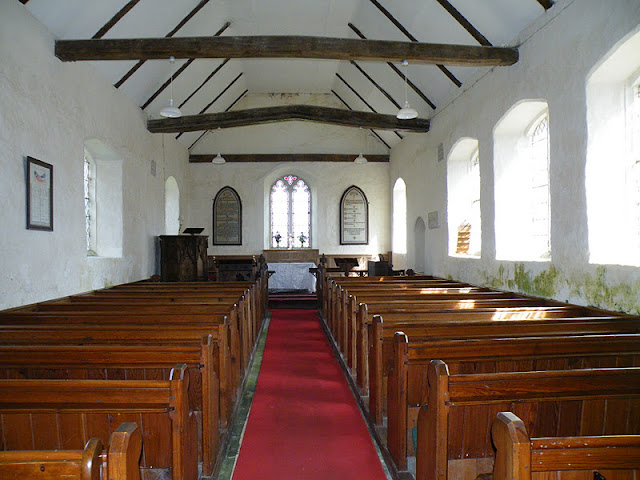 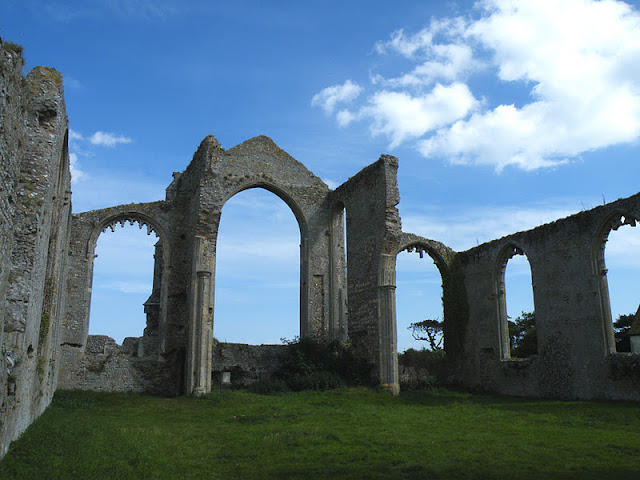 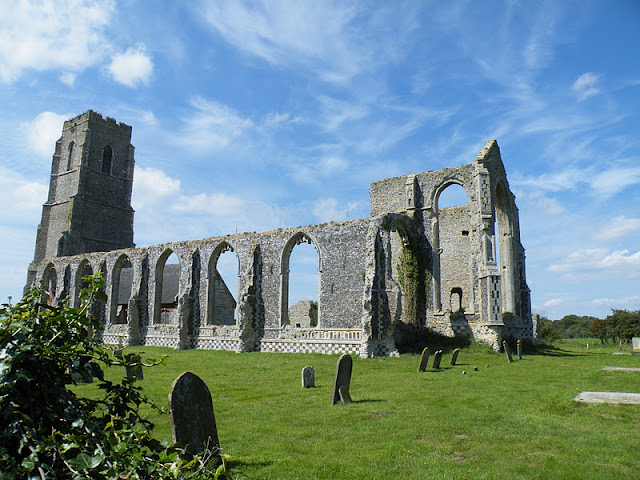 I had only gone a couple of hundred yards when I found I could go no further - the lane had been blocked off by an overgrown hedge which had been made to form a natural barrier, and a couple of large council signs declared that there was no public right of way beyond that point because of serious coastal erosion. Now although my previous visit there had been sixteen years ago I was sure I remembered walking right to the end of the lane and standing just a few feet from where it fell off the cliff (in fact I had taken a photo of it at the time) so it must have been sometime since then that it had been blocked up by the hedge for public safety. So it looked like the end of 'the road to nowhere' was now inaccessible - or was it?

A few yards back from the blockage was a gap in the hedge which ran parallel to the lane, with a footpath leading through and skirting the edge of the adjacent field, so to satisfy my curiosity I went to take a look. A couple of dozen paces took me past the blockage and to within only a few yards of the cliff edge, where I stood and looked across a yawning chasm of eroded cliff face and the very end of the lane. As I made my way back to the lane proper I noticed a small gap in the hedge which formed the blockage, and not being one to give up easily I managed to negotiate a way through - and finally I achieved my goal. I was standing at the end of 'the road to nowhere', though due to the constant erosion of the cliff face it was much further inland than it had been sixteen years ago. 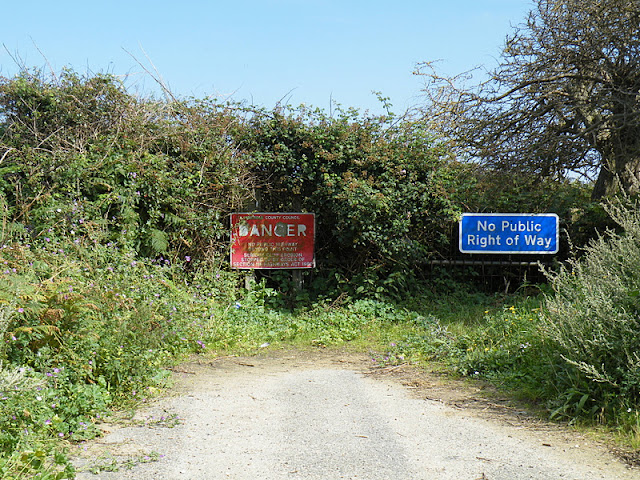 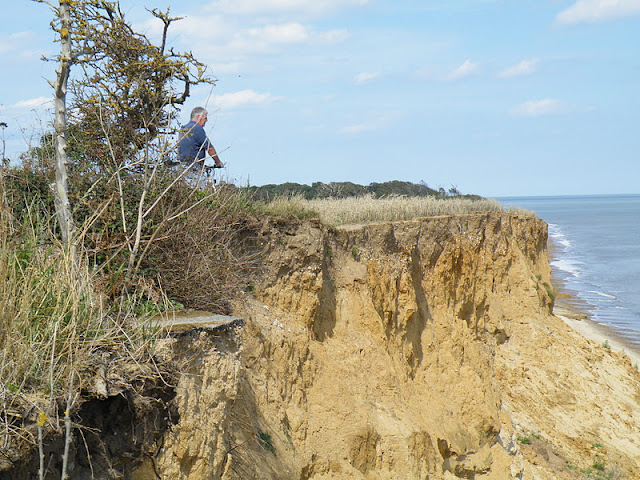 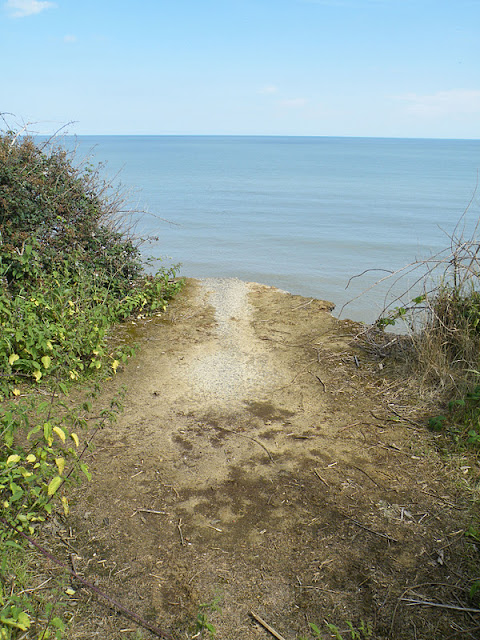 ﻿With my curiosity finally satisfied and a couple of photos taken I went back through the hedge and made my way back along the lane to the van. My impromptu visit to Covehithe and 'the road to nowhere' had brought back a few memories - now to see if Dunwich was still the same as the last time I went there. The village itself was about eleven miles south of Covehithe and four miles from the A12 down a very long lane which passed through the vast expanse of Dunwich Heath - it seemed to take forever to get there and I certainly didn't remember the lane being so long, but then I hadn't been the one driving at the time so maybe it was and I just hadn't noticed. However, I arrived in the village eventually and the lane led me to the large area of rough gravel-surfaced, pot-holed ground which called itself a car park, and finding a space I parked up, released the dogs from the back of the van and set off to find Dunwich Greyfriars, the ruined friary.

My good sense of direction led me a very short distance from the car park to another lane on the left and as I walked up the incline I knew I would find Greyfriars at the top. There was only one problem when I got there though - where previously the ruins could be accessed through a large wooden gate from the lane that gate was now closed and firmly fastened by a chain and padlock. Now I could have climbed over if I'd been that way inclined, but I couldn't very well throw the dogs over so I had to go back down the lane and take the footpath which wound through a wooded area between the friary grounds and the cliff top. I got there eventually, only to find that dogs were now not allowed in the grounds, so I had to hitch them to a fence post while I went to take some photos. The ruins - what there were of them - were exactly the same as I remembered and it didn't take long to get the photos I wanted, then I retrieved the dogs from the fence post and made my way back towards the car park and the beach. 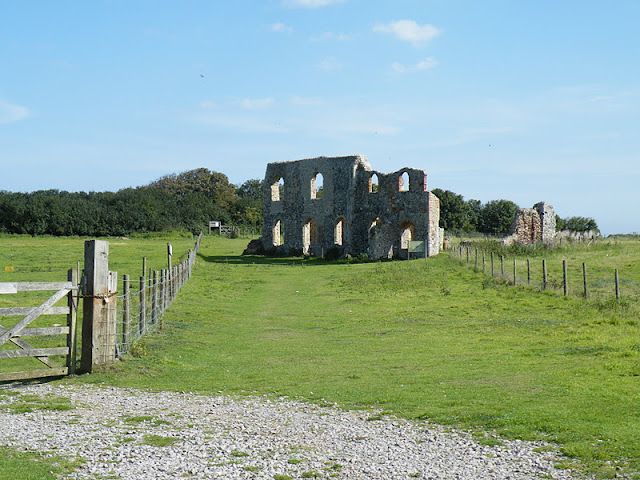 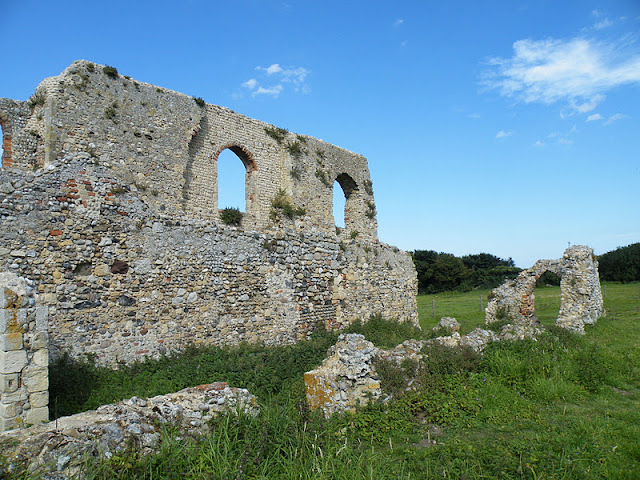 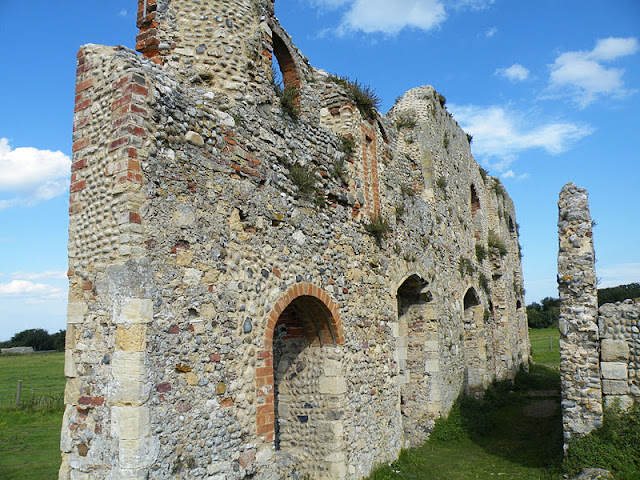 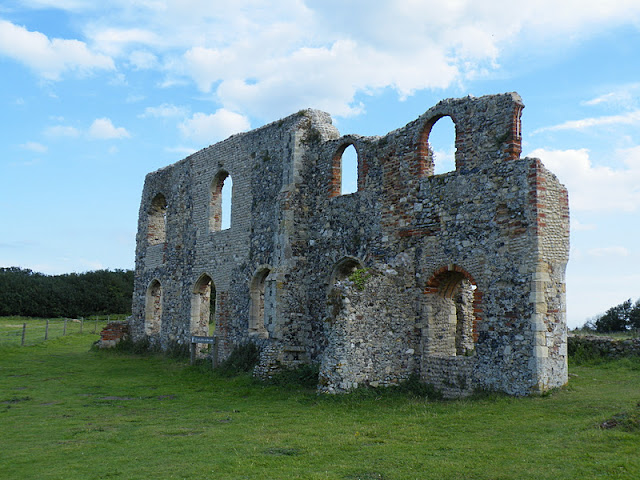 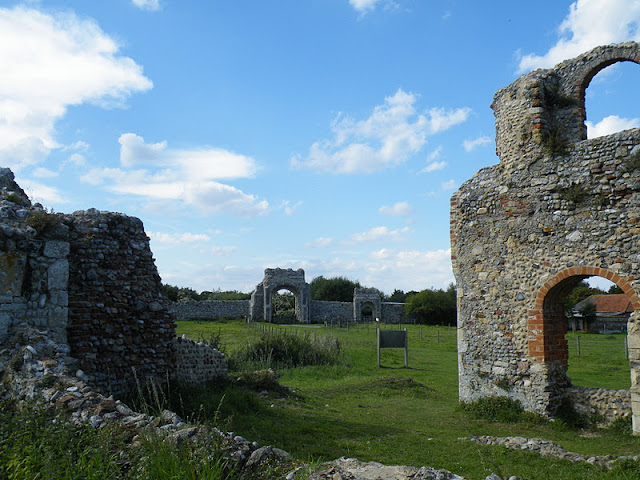 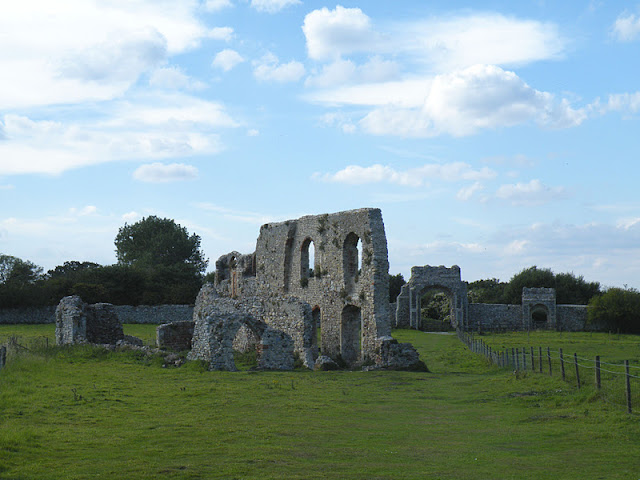 There was nothing much to see on the beach, just miles of shingle stretching north and south and a few fishing boats dotted here and there. The clouds were starting to increase a bit and the sun had decided to play hide and seek but it was still very clear and I could see the buildings of Sizewell to the south and the pier and lighthouse at Southwold to the north. After taking a couple of photos I took Sophie and Sugar back to the van then went across to the cafe for a much-needed coffee - where I walked in and promptly walked out again. The cafe was busy and there was quite a queue; after the previous day's experience at Oulton Broad I didn't fancy the possibility of going through a repeat, so I went to the little gift shop next door and got a can of Coke which I drank back at the van. 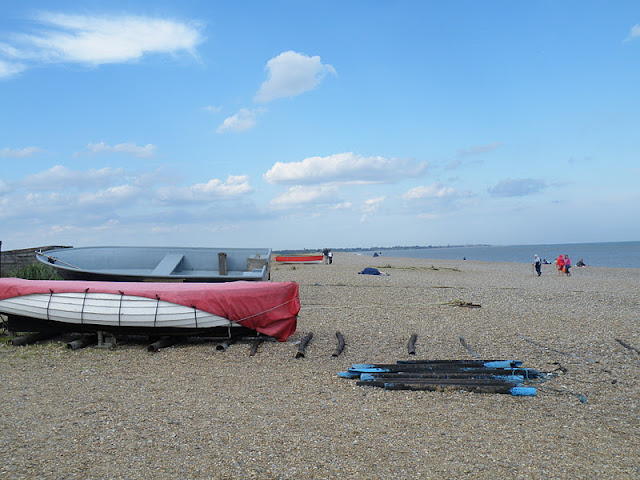 With my thirst quenched and nothing else to see I drove away from the car park and headed back to the A12 - I did briefly consider going to nearby Minsmere nature reserve but decided instead to visit my friends. Turning off the A12 I drove through the country lanes to the outskirts of Beccles, but reaching my friends' cottage I found that they weren't at home - there was the possibility that they were spending time at their caravan but I couldn't be certain, and as it was several miles in the wrong direction there was no point in going, so I got back in the van and continued on to Bungay. My first stop there was Ady's place but before I had chance to knock on the door his next door neighbour told me he was working and may not be back till late in the evening. After a brief chat with her I drove round to see Andy and Sue - at least they were in, and after Andy had made a brew I spent a very pleasant hour with them before going on to Jane's place. As always it was lovely to see her, and with a second mug of coffee at my side I settled down for a good chat and a catch-up of family news. All too soon though it was time for me to leave, and after taking the dogs for a quick walk along the grass verge opposite the house I set off back to California.

Arriving back on my pitch I reversed the van and connected up the awning - I'd done enough driving for one day - then fed the dogs and made myself a sandwich. My evening was spent watching a bit of tv and catching up with various posts on UKCS, and other than taking the dogs for their pre-bedtime walk round the site I didn't go out again. I'd had a good day revisiting a couple of places from years ago and reliving a few memories, but I was more than ready for my bed when the time came.
Posted by Tigermouse